The aim of the present study was to formulate a controlled release Ziprasidone HCl oral matrix tablet using different proportions of hydroxyl propyl methylcellulose (HPMC) K15M to minimize dosing frequency. Matrix tablets were prepared with various proportions of HPMC by direct-compression to upgrade their compliance and safety profile. Micromeritic properties of blends, physical evaluation of tablets, swelling, and dissolution studies were performed to optimize the formulation. The drug release profile indicated the controlled release pattern of formulation with HPMC K15M 50% for 24 hours effectively. Ziprasidone CR matrix-based tablet was formulated successfully and it was shown that the release of drugs could be controlled by the inclusion of different ratios of various viscosity grade polymers.

Ziprasidone is a benzo-thiazolyl-piperazine derivative (Chemical structure given in Fig. 1), atypical (or second-generation) antipsychotic drug, used widely for the treatment of schizophrenia and bipolar disorders [1]. Ziprasidone belongs to BCS class II. The oral dose in schizophrenia is 20 mg twice a day with a meal [2]. Ziprasidone acts as an antagonist of serotonin and dopamine, which selectively binds to 5HT-2, D-2, adrenergic α-1, & α-2, and histamine H-1 receptors. The greater affinity for 5HT-2A in contrast to another anti-schizophrenia drug caused minimum motor adverse effects [3]. The half-life of ziprasidone is 6 hours and the therapeutic range is 50 to 130ng/ml [4]. 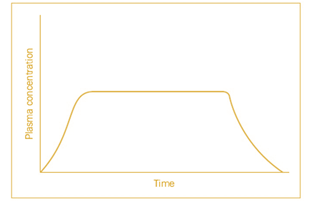 Sauri et al., (2014) formulated Captopril CR matrix tablets with methocel K15M and ethyl cellulose using the quality by design method [10]. They found that the drug was release by erosion mechanism from tablets containing ethyl-cellulose and in case of tablets containing methocel K15M, drug was release by diffusion mechanism. With an increase in the proportion of methocel, the lesser the size of aqueous filled apertures of gel so drug diffuse via apertures and persistent polymer network [11].

Polymers are matrix-forming agent which control drug diffusion rate. Hydrophilic and hydrophobic are two basic polymer types [12, 13]. The release of a poorly water-soluble drug is controlled by the rate at which matrix soaks and dissolves or erodes [14, 15]. Therefore, the hydration and gel characteristics basically control the release kinetics of the drug [16].

Hydrophilic matrix is widely used in the formulation of a controlled release drug delivery system due to low cost and flexibility. Hydrophilic polymer act as a gelling agent and drug release from the gel barrier takes place by diffusion or erosion of gel. Drug release characteristics depend on the composition and strength of polymers [17]. Hypromellose or Hydroxyl-propyl methyl-cellulose is one of the most common polymers used in the hydrophilic matrix system. When HPMC encounters fluid, matrix hydrates and the polymer turns from a glassy to a viscous state, framing a gel bed which confines diffusion and slow down fluid intake in the matrix, thus, control drug release [18]. The widely used hydroxypropyl methylcellulose (Methocel) grades are 2208 (K) & 2910 (E).The letter K means it is USP type HPMC-2208 and 15M means 15,000 cps viscosity (a high viscosity grade of methocel) [17].

Microcrystalline cellulose (MCC) or Avicel among various excipients is preferred in tablet manufacturing to get desirable flow property and compressibility of the blend. Avicel also acts as a binder and disintegrating agent [19].

The aim of the study was to develop oral controlled-release Ziprasidone matrix tablets with hydrophilic polymer HPMC grade K15M by direct compression method. The study included detailed work on formulation and evaluation methods.

Following methods were used to determine micromeritic properties of blends [20]:

Angle of repose: It was measured by the fixed funnel method. The blend was allowed to flow through the funnel andangleof repose (ϴ)was determined using the equation 1:

(Where, ϴ is the angle of repose,h is the height of cone and r is the radius of cone) [21]

Apparent(bulk) and tapped density: Apparent density was measured by pouring the blend in a measuring cylinder. The mass and bulk densities were noted. The formula for bulk density is given in Equation 2:

Tapped volume is the least volume of blend occupied in cylinder gained after tapping a cylinder containing blend. The formula for tapped density is given in Equation 3 [21]:

Compressibility index (Cass’s Index) and Hausner’s ratio: These measures depends on the bulk density and tapped. These percentage or ratio used to determine flow characteristics of blend and can be calculated using the following equation 4 and 5:

Formulations were prepared by blending HPMC K15M in four different proportions (20, 30, 40,& 50%) with Ziprasidone HCl and microcrystalline cellulose PH 101 in a polybag by a geometric fixed dilution method. Finally, magnesium stearate was added, mixed, and directly compressed with a manually operated single round shaped punch tablet machine with a target compression weight of 250 mg. The composition of various formulations is presented in Table 1.

The Ziprasidone hydrochloride content in the matrix tablet was determined by the developedrapid ultra-violet spectrophotometric method.

Standard preparation: 50 mg Ziprasidone HCl was transferred in 100ml graduated volumetric flask containing 10ml methanol and then made up the volume with saline buffer (pH 7.4)to get 20 μg/ml solution. After that, the solution was sonicated and the absorbance was determined at 318nmusing a UV spectrophotometer [22].

Assay method: A sample of 20 tablets was crushed and the powder (equal to 50mg Ziprasidone HCl) was added to 100-ml graduated flask containing 50ml methanol then shaken vigorously and sonicated, and the volume was made up with 100ml methanol and filtered through a 0.45-μm filter. This solution was further diluted with saline buffer (pH 7.4) to get a 20μg/ml solution and determine the absorbance at 318nm [22].

Ziprasidone matrix tablets were subjected to several quality tests to determine the uniformity of weight, dimension, structural integrity, durability, and disintegrating properties by randomly selecting 20 tablets from each batch [23, 24].

Weight variation: Each tablet was accurately weighed individually using an electronic analytical balance and mean and stand deviation was taken. The weight deviation was compared and correlated with USP specifications.

Thickness: The thickness of each tablet was accurately measured in millimeter by vernier caliper. The mean and standard deviation was calculated.

Hardness: The hardness of randomly selected tablets from each batch was determined individually using a digital hardness tester.

Friability: The selected tablets were randomly weighed and run at 100-rotations in the friabilator for 4min, then reweighed, and friability percentage was calculated using the equation 6:

(Wi  & Wt are weights of tablets before and after test)

Disintegration Test: One tablet was taken in each tube of disintegration tester filled with 900 ml distilled-water at 37±2 °C. The disintegration was completed with no residue were carefully recorded in hours [24].

A tablet of each batch was individually weighed and immersed in a beaker containing 250 ml distilled water at room temperature for 8 hours. The weight of swollen tablets was recorded every hour (after removing surface water). The swelling index was determined using the equation 7:

The USP dissolution apparatus type-II (Paddle apparatus) was used to measure the drug release rate from Ziprasidone HCl HPMC matrix tablets. The paddle was run for 24 hours at 50rpm and the temperature of dissolution media was maintained at 37±0.5°C. The dissolution media used was 900 ml phosphate buffer solution (pH7.5). The drug release was evaluated by taking a sample of 5 ml (which was replaced with fresh dissolution medium) at a predetermined time interval of 30min, 1, 1.5, 2, 3, 4, 5, 6, 8, 10, 12, 18, and 24hours. The sample solution was filtrated through a 0.45-μm Whatman filter and the absorbance was analyzed at 318nm using a UV spectrophotometer. Cumulative drug release percentage was computed and the mean of six tablets was included in the result.

The results of the pre-compression micrometric evaluation of blends i.e. apparent and tapped density, Hausnerratio, carr’s index, and angle of repose were tabulated in Table 2. The flowability grade of each blend is mentioned according to the range given in USP [20]. FT-4 showed good flow property.

The results of the post-compression physical evaluation of formulated tablets and assay are summarized in Table 3. Matrix tablets were smooth, shiny, and compressed without any problem. Weight variation was in USP acceptable range within the limit of ±5 mg. The thickness of all tablets lied within a range of 4.64±0.09 to 4.88±0.13mm. Hardness was found between 10.0±1.08 to 12.57±0.87.All compressed formulations showed a friability of less than 1%. Disintegration time was in the range of 3.53 to 5.13 hours. It is noticed that disintegration time increase with an increase in polymer concentration. The drug content of each batch was assayed at 318nm and the drug content in these formulations varied between 95.52 and 98.74%. 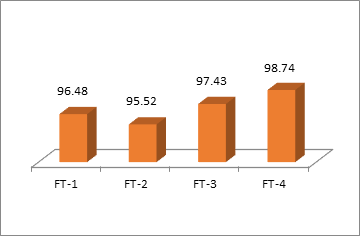 Fig. 3 indicates a uniform amount of drug in all formulation batches. Assay of all formulations was within the USP specified limit i.e. 95-105%. [26]

Swelling studies were performed to determine the extent of swelling behavior in HPMC matrix formulations. The swelling of the matrix was progressive. An increase in swelling index with time showed the capacity of polymers to swell in the medium. The hydration range of Ziprasidone formulations for 8 hours is illustrated in Fig.4.It was observed that the swelling index increase with an increase in the concentration of HPMC in all formulations. It may be associated with rapidly swelling and gel layer formation by HPMC at the outer tablet surface. 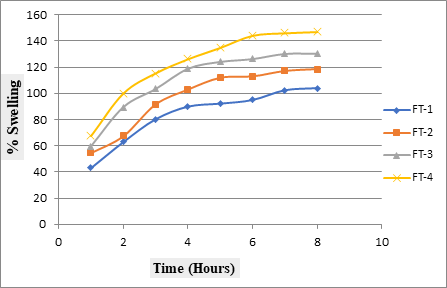 Dissolution studies showed that with an increase in polymeric concentration, the release of drug in later hours of dissolution was notably declined. This may be associated with more gel layer formation, which elevated path length for drug diffusion. FT-1 and FT-2formulations with polymer content of 20 and 30% was failed to maintain drug release and whole drug released within 4hours, however, the formulation FT3 maintained sustained effect for some time but failed to control the release for 24 hours. FT-4 with 50% HPMC K15M had significantly controlled release but the whole drug was released before 24hours and hence selected as optimized formulation. The dissolution profiles of all formulations were presented as percent drug release vs. time curve in Fig. 5. 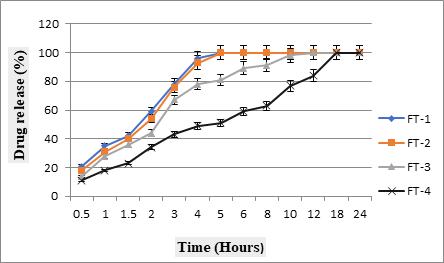 A new controlled release formulation of Ziprasidone hydrochloride has been developed and evaluated by different quality tests and in vitro dissolution studies. The result of this study revealed that the hydroxypropyl methylcellulose grade K15M in the concentration 50% slows down the release of drugs from matrices and control drug release effectively and was found to be the optimized formulation and can offers benefits for the schizophrenic patients by reducing dosing frequency.

Thus it can be concluded that controlled release Ziprasidone hydrochloride matrix tablets can be efficiently prepared by using HPMC through a cost-effective and simple direct compression method.

All authors did not show any conflict of interest. 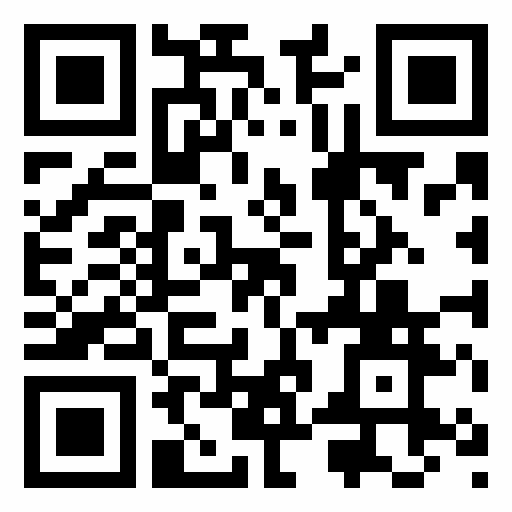