RISK FACTORS OF DIARRHEA IN CHILDREN LESS THAN 5 YEARS OF AGE IN EAST MEDNI, SUDAN ‎‎

Introduction: Diarrheal diseases in children is a global public health issue and it continues to kill the children under five years. Sudan is one of the major causes of under-five morbidity and mortality, and diarrheal diseases control in children has become a national priority of health Plans. Objectives: The study aimed to assess the risk factors of diarrheal diseases between children under 5 years in East Madni, Sudan. Methods:  This is a descriptive cross-sectional study. Mothers of children who were suffered from diarrhea in the previous year were surveyed. A total of 150 mothers were taken for the sample. Informed written consent was taken and they were interviewed using a validated questionnaire. Mothers of the children in the area who have at least one child aged less than 5 years old and suffered from diarrhea in the past year who were willing to participate in the study were interviewed. Results: The majority (61%) of the mothers were aged between 25-45 years. It was revealed that contaminated water (13%), contaminated food (19%) and teething (10%) were the reasons that the mothers were aware of the causes of diarrhea. About, 85% of households used the public net as sources of drinking water and 32% had used clay pots for water storage. The result showed that most households (80%) had covered their stored water. Methods used to dispose of solid waste were burning (75%) and storage in a home (17%). However, 85% of households were used to dump the solid waste near their homes that would create breeding sites for insects. The distance from the house to the solid waste collection sites and mother's education level (p < 0.05) were associated with the risk of developing diarrhea in children. Conclusion: Potential risk factors associated with diarrheal diseases in this population were poor knowledge of the causes of diarrhea among mothers, the distance of solid waste collection sites from homes and poor disposal methods of solid waste. There is a need for health education to improve mothers' knowledge about diarrhea, its causes, and prevention‎.

The term diarrhea is defined when the stools of an individual are loose or more watery at least three defecations per day or more repeated passage than is usual which can be distinguished from that that occurred in breastfeeding babies in which the faces are in the form of repeated formed stools or the loose pasty stools. Diarrhea is moreover responsible for inducing malnutrition among children their ages are less than 5 years. The two forms of diarrhea are preventable and treatable. [4, 5]. A fluid loss in diarrhea has fatal outcomes and it is the leading cause of malnutrition. In developing countries, diarrheal disease in children is representing the 2nd leading etiology of morbidity and mortality. Children suffering from diarrhea are usually complaining from undernutrition, which appears clearly in diarrheic children postmortem. The increase in the frequency of diarrhea, the severity of malnutrition is increased and the condition is become worse, particularly in children less than 5 years of age. The estimations revealed that there are about 2.5 billion incidences of diarrhea and about 1.5 million mortalities occur in children under-five years yearly.

Many etiological factors can be induced diarrhea which may be bacterial, viral and parasitic agents, most of these causative agents are spread by feces-contaminated water or utensils [6]. The severity and frequency of infection are affected by many influences such as cooking and cleaning, safe water for drinking, and a shortage of sufficient sanitation and hygiene. One of the most effective agents in inducing diarrhea is the Rotavirus and Escherichia coli, which causing moderate-to-severe diarrhea children in developing countries [7, 8]. Also, cryptosporidium and Shigella species may be important causative agents as diarrheal disease pathogens.

The route of transmission of causative agents to cause diarrhea is frequently through the faeco-oral route [9], through intake of water and food polluted by fecal matter or direct contact with infected feces, where the incidence of infection via contaminated water and food was more than 70% of cases of diarrhea [9].

Globally, the majority of diarrheal associated deaths occur in Africa and South Asia [10]. An estimated half of deaths from diarrhea among young children occur in Africa, where diarrhea is the largest cause of death among children under five [1].

Water polluted by human feces (e.g. latrines, septic tanks, and sewage), is of particular distress in the case of sources of diarrhea. Also, unsafe home water handling and storage are considered an essential risk factor. The presence of different microorganisms in animal feces play a role in causing o diarrhea. Moreover, the foods that stored or prepared by unhygienic methods can also play the main  role in inducing diarrhea [11].

The number of mortalities due to diarrheal disease may reach 2.5 million yearly is a large burden. Also, many times this number has long-term, lasting effects on nutritional status, growth, fitness, cognition. It is supposed that diarrhea has an efficient effect on growth due to many factors such as altered feeding practices, reduction in appetite, and diminished nutrients absorption. Also, there an impact on height, which can cause stunting among children.  The WHO determines the prevention package which includes five principle categories that need an intensive approach in their performance. The package comprises,  vaccinations against measles and rotavirus, promotion of handwashing with soap, promotion of early and exclusive breastfeeding and supplementation of vitamin A, improved water supply both quality and quantity, through community-wide sanitation promotion and water treatment and safe storage of household water. [10]

To identify the risk factors of diarrheal disease between children their ages are less than five years in East Madni, Sudan.

The present work was a cross-sectional, descriptive study carried out amide mothers of children less than five years in East Madni, who had diarrhea in the past year.  Mothers were selected from the Gaber area which is located in East Medani and is boarded with Elgdarif Street in the east and Eldindir River in the south and north and west residential areas. The area has a population of nearly 2000.   The registered number of households in the area during the time of the research was 250.

The sample size was counted using the total number of households are250 where 150 mothers were selected from the study population by using the following sample Equation.

The data was collected by using a structured questionnaire designed in close-ended questions. It was developed to collect data regarding the education level of mothers, the definition of diarrhea, causes of diarrhea, sources and storage of water, method of handling solid waste.

The obtained results were analyzed statistically by using SPSS version 25, and the chi-square test was carried out with a 95% confidence level to find the relations among the different variables. P values less than 0.05 were considered as significant differences.

Descriptive statistics of the data obtained are given in the following graphs and tables. 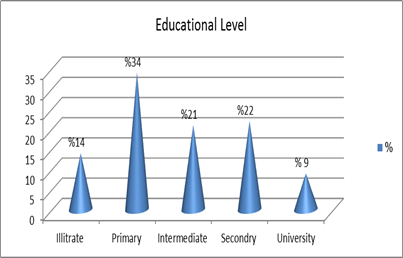 Figure 1: Distribution of educational level of mothers having children less than five years in East Medni 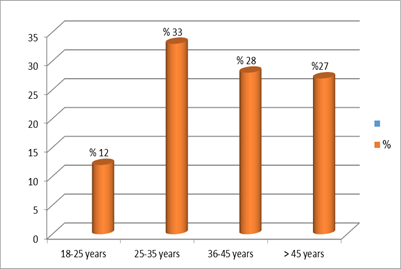 Figure 2: Distribution of ages of mothers having children less than five years in East Medni 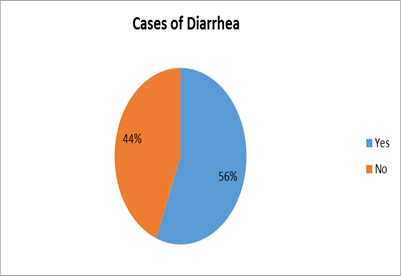 Table 1: Awareness about the causes of diarrhea by mothers 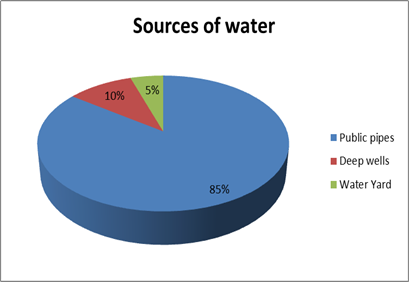 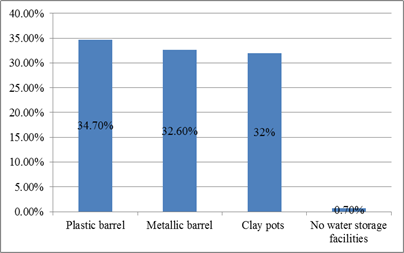 Figure 5: Patterns of storage containers for water in households in East Medni, 2017. 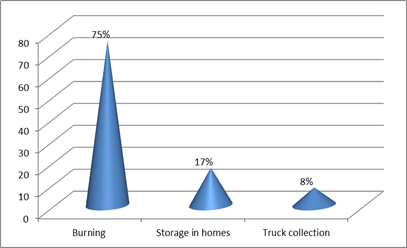 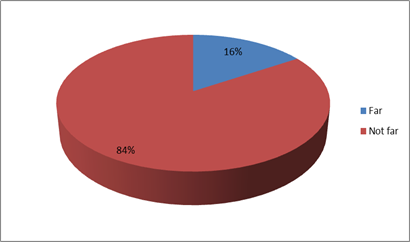 The study was conducted to identify the risk factors of diarrheal disease between children their ages are less than 5 years in East Madni in Sudan. The study showed that 56% of households have children less than five years who suffered from diarrhea disease in the last year. There are many factors related to the increase in diarrhea in the study population in and around the homes [12].

The study indicated that the education level of mothers of children less than five years varied from illiteracy to postgraduate (Figure -1) with a significant number of non-educated and primary school educated mothers (50%). This situation in addition to other factors contributes to adopting bad attitudes and worse habits and practices towards diarrheal disease moreover they were exposed their children to diarrheal diseases. Children of mothers who received above secondary level education were less likely to have had diarrhea in the last year than those who did not educate. The age of mothers was not significantly associated with childhood diarrhea risk in East Medni.

The Knowledge of mothers regarding diarrhea as a disease was assessed, it was found that (40%) of mothers,  were having correct knowledge regarding the causes of diarrhea  Contaminated water, contaminated food and contaminated hands as the risk factors were mentioned by 13%, 19%, and 4% of mothers respectively. in addition to that 10 % of mothers thought that teething can cause diarrhea, this was agreed with the results of the study conducted by  Aditya Mathur in India which revealed that low public consciousness of accurate etiologies of diarrhea. In this study, poor and hygiene (21%) and littering around the household (15%) as risk factors were identified by a lower percentage of participants. [13].

The study showed that 85% of households had used the public net as sources of drinking water and about 32% had used clay pots for water storage. The result also showed that most households (80%) had covered their stored water

The study observed that 25% of storage containers of drinking water were not clean. That indicated an unsafe water supply. This situation is not inconsistent with the guidelines of the provision of safe water to households by UNESCO. According to UNESCO, it is extremely important to protect water from pollution during storage. The water containers should be saved clean and washed repeatedly with boiling water or with a bleach solution.

The study pointed out that burning (75%), storage in the home (17%) as the main methods of solid waste disposal. Nearly 85% of households disposed of the solid waste near to the homes, which creates breeding sites of insects. This result is inconsistent with the results of the study conducted in India by Aditya Mathur, which indicated that 89% of households are dumping waste on the streets. [13]

Also, the study revealed that there is a relationship between the disposal of solid waste and a family history of diarrhea (p <0.05) as the around 30% of households disposed of the waste near to the homes which facilitate the proliferation of diseases vectors. Also, the study revealed the relationship between the sites and location where the waste is disposed of and the educational level of mothers (p < 0.05). The educational level increases the knowledge of the disposing hazards of solid waste.

Increasing mother’s awareness regarding the causes of diarrhea in children and encourage households to dispose of solid waste properly would reduce the risk of diarrheal diseases in children in Medni, Sudan. 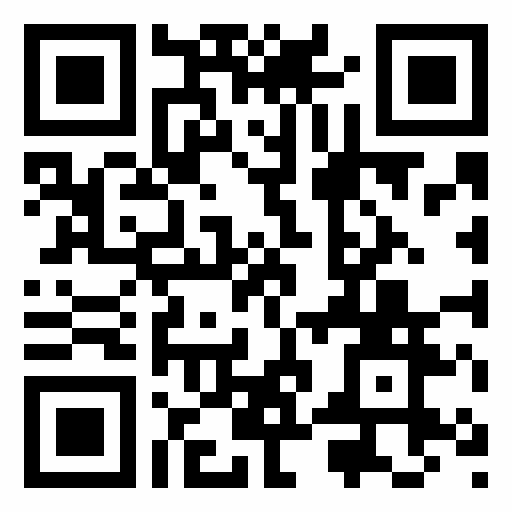