Plants used as traditional medicine contain a wide range of substances that can be used to treat chronic and infectious diseases [1, 2]. Shallot (Allium ascalonicum L.) is a member of the Amaryllidaceae family, which consists of several famous spices and remedies used in Vietnamese cuisine and in folk medicine such as garlic, chive, leek….Shallot is rich in starch, vitamin A, B, C, and bioactive compounds, such as selenium and sulfur-containing compounds, mannose-specific lectin, quercetin, and its glycosides, furostanol saponins, etc. [3-5]. In Nigerian folk medicine, shallot could be used to treat impaired vision, convulsion, and dysentery [6]. On the other hand, Amin et al. suggest that shallot exhibits strong antibacterial and anti-fungal activities and can be used to treat dermatomycosis and other infectious diseases [7]. The other beneficial effects of shallot including antioxidant, anticancer, anti-allergic, hypoglycemic, and hepatoprotective effects are well documented in the literature [4, 8-11]. For example, Mohammadi-Motlagh (2011) proves that the aqueous extract of shallot can inhibit the proliferation of human acute T cell leukemia (Jurkat cells), human erythroleukemia (K562 cells), and mouse fibrosarcoma (Wehi164) cell lines and possesses a remarkable anti-inflammatory effect [4]. Furthermore, Wongmekiat et al. (2008) suggested that shallot exhibits strong antioxidant and free radical scavenging activities, which in turn protects the kidney from cyclosporine-induced nephrotoxicity [10].

Recently, black shallot, a novel processed product of shallot, has been studied and developed for eliminating the offensive flavor of fresh shallot via the aging process in high temperature and humidity. Black shallot possesses a particular dark-brown color, gummy texture accompanied by a fruit-like sweet taste. The aging process alters not only the sensory attributes of shallot but also its chemical constituents. In a previous study, Moreno-Rojas et al. suggested that the concentration of some flavonoids, amino acids, and organosulfur compounds of black shallot changed during the aging process [12]. The difference in chemical composition between fresh and black shallot may lead to the difference in their bioactivities. However, the bioactivities of black shallot’s ethanolic extract have not been studied yet. The aims of this study were the determination of chemical composition and some bioactivities such as anti-oxidative, anticancer, and anti-inflammatory effects of black shallot extract, which provides more information to utilize this product as one of the potential functional foods in future.

Shallots were rinsed with water and peeled off the outside husks to remove the dust and damaged parts. The whole shallots subsequently were fermented in the aging chamber (Shellab, USA) in accordance with Tran et al. procedure [13]. Concisely, shallots were incubated at 75oC in 90% relative humidity for 20 days to produce particular dark-brown products, black shallots (Figure 1). Black shallots or flesh shallots were sliced and immersed with 5 volumes of 98% ethanol solution for 1 week, and this step was repeated 2 times to obtain the maximum yield. The resulting extracts were combined and filtrated through a Whatman filter paper. Filtrates were eventually condensed in reduced pressure (130 mmBar) at 60oC to obtain the resulting extracts (about ½ of the initial filtrate volume). The ethanol residue in extracts was eliminated via sublimation drying, then the black shallot (BSE) and fresh shallot (FSE) extracts were stored at 4oC until further use.

Figure 1. Black shallot is the novel processed product of fresh shallot via the aging process in a temperature- and humidity-controlled chamber. Fresh shallot (A), black shallot after aging for 20 days (B).

ESI-MS/MS analysis was performed to elucidate chemical constituents of black shallot extract (BSE). In brief, the aliquots of BSE were injected into the Dionex UltiMate 3000 HPLC system coupled with the amaZon SL mass spectrometer (Bruker Daltonics Inc., Germany). Column C18 Pororshell (2.1 × 150 mm, 4 µm) was used as the stationary phase and the mobile phase was the mixture of 0.1% formic acid in water (solvent A) and acetonitrile (solvent B) in step gradient elution modified from the method of Bonaccorsi et al. [14]. The chromatographic separation was set as gradient elution from 5–20 % B (0-5 min), 20–30 % B (5-10 min), 30–35 % B (10-20 min), 35–50 % B (20-35 min), 50–95 % B (35-38 min), and staying at 95% B, then turning back to 5% B and equilibration for 4 minutes, with total run time about 45 minutes. The flow rate was 0.3 mL/min and the injection volume was 2µL. The wavelengths were set at 370 and 260 nm. ESI-MS was equipped with a quadrupole ion trap. Nebulizer gas was set at 2bars, the capillary was set at 4,500V, and drying gas temperature was 220oC with a flow rate of 7.0 L/min. MS assessment was done in both negative and positive modes and scanned at the mass range of m/z 80-1500 amu. HyStar, Trap control, and Chromelon were used as controlling programs. quercetin 3-glucoside (Chengdu Biopurify Phytochemicals Ltd.) and Quercetin hydrate (Sigma Aldrich) were used as standards.

Determination of the antioxidant activity of black shallot extract

The antioxidant activity of BSE and FSE was measured via the 1,1-diphenyl-2picryl-hydrazil (DPPH) radical scavenging assay according to the method of Kumar et al. with some modifications [15]. Briefly, the 0.1 mM DPPH solution was prepared in ethanol, and extracts were diluted in DMSO to obtain the 4 mg/mL solution. Then, 0.1 mM DPPH solution was mixed with a volume of ethanol extract to obtain the final extract concentration of about 200 µg/mL. The mixture was vigorously shaken and stand at room temperature for 30min, after which the absorbance of the sample was measured at 515 nm using a microplate reader (Infinite 50, Tecan, Switzerland). The mixture without ethanol extract was used as the control and ascorbic acid solution (final concentration of 44 µg/mL) was used as positive control. DPPH radical scavenging activity was calculated as the following formula: DPPH radical scavenging activity (%) = Ao-A1Ao  ×100%; in which, A0 is the absorbance of control at 515 nm, and A1 is the absorbance of the sample at 515 nm.

Determination of the anti-inflammatory activity of black shallot extract

The anti-inflammatory activity of the extract was evaluated via quantification of nitrite oxide production using the Griess reaction [16]. In brief, mouse macrophage cells (Raw 264.7) were sub-cultured into 96-well plate with a density of about 2.5 × 104 cells/well for 24 hours and subsequently incubated with or without black shallot extracts (30-100 µg/mL) for 2 hours. Cardamonin (0.3-3.0 µM) was used as a positive control. Then cells were stimulated with 2 µL LPS (0.1 mg/mL) for 24 hours. The cell culture media was incubated with Griess reagent (ratio 1:1) and kept at room temperature for 10 min. The absorbance of the sample was recorded at 540 nm via a microplate reader (Infinite 50, Tecan, Switzerland). The nitrite concentration in each sample was calculated using a serial dilution standard calibration curve prepared with sodium nitrate.

Cell viability of macrophages was measured by the 3-(4,5-dimethylthiazol-2-yl)-2,5 diphenyltetrazolium bromide MTT assay [17, 18]. Briefly, 264.7 cells after treatment with extracts or reagents were incubated with MTT solution (5 mg/mL in phosphate-buffered saline) at 37oC in a 5% CO2­ humidified atmosphere for 4 hours. The formazan crystal was dissolved by adding 100 µL of DMSO (Sigma-Aldrich, St. Louis, MO, USA) and absorbance of the solution was measured at 540 nm via a microplate reader (Infinite 50, Tecan, Switzerland). The cell viability and inhibition of nitrite oxide production were calculated and expressed as the average percentage of three analyses.

Determination of the anticancer effect of black shallot extract

Anticancer properties of the extract against human hepatocellular cancer (HepG2) and cervical cancer (Hela) cells were evaluated by the 3-(4,5-dimethylthiazol-2-yl)-2,5 diphenyltetrazolium bromide MTT assay [19]. Briefly, HepG2 and Hela were cultured in 96-well plates with appropriate density (0.8 × 104 and 0.4 × 104 cells/well, respectively) for 24 hours. Then, the media were carefully replaced with fresh media containing extracts (final concentration of 100 µg/mL) or positive control (Paclitaxel-final concentration 5 mM) and incubated for 48h. Media were removed and cells were incubated with MTT solution (5 mg/mL in phosphate-buffered saline) at 37oC in a 5% CO2­ humidified atmosphere for 4 hours. The formazan crystal was dissolved by the addition of 100 µL DMSO (Sigma-Aldrich, St. Louis, MO, USA) and the absorbance of the solution was recorded at 540 nm via a microplate reader (Infinite 50, Tecan, Switzerland). Cytotoxicity of the extract against HepG2 and Hela was determined and expressed as an average percentage of three analyses.

All determinations were done in triplicate. The experimental results were expressed as mean±standard deviation, and the Statgraphics Centurion XVI software (Statpoint Technologies Inc., Warrenton, Virginia, USA) was used to conduct statistical analysis. Difference between different treated groups were analysed using ANOVA test and multiple range tests with the criterion of statistical significance less than 0.05 (p<0.05). 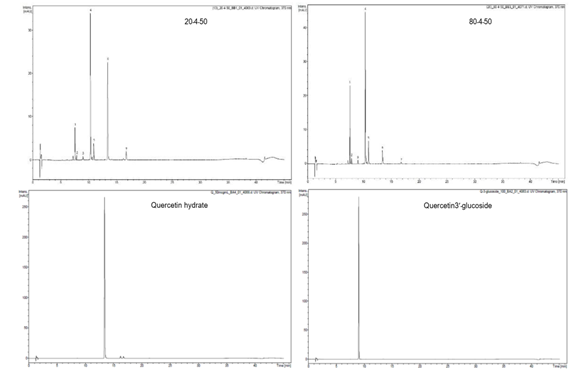 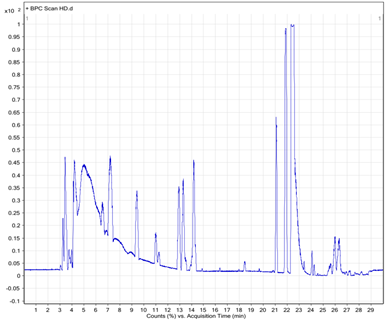 The biological effects of those compounds have been well documented in the literature. For example, Zhou et al. reported that isorhamnetin exerted anticancer activity against human hepatoma cells (HepG2) and murine colon carcinoma cells (CT26), as well as free radical scavenging and anti-inflammatory activities [20]. Furthermore, quercetin aglycone is the ubiquitous flavonoid, which exists in several fruits and vegetables and exerts many bioactivities, such as anticancer, antioxidant, anti-diabetic, and anti-inflammatory effects [21]. According to Kang et al. (2013), quercetin aglycone could protect microglial cells from LPS induced nitric oxide production via downregulation of the NF-κB signaling pathway and activating of the Nrf2-dependent HO1-1 pathway, which in turn alleviates the nitrosative stress in the nerve system [22]. In previous studies, both quercetin 3-glucoside and quercetin 4’-glucoside exhibited the anti-oxidative effect via suppressing iron ion driven lipid peroxidation in the intestinal tract, but quercetin 4’-glucoside was suggested as the more efficient antioxidant as compared to quercetin 3-glucoside [23]. Williamson et al. also suggested the anticancer effect of quercetin 4’-glucoside via induction of quinone reductase, the anticarcinogenic phase II marker enzyme in mouse hepatoma (Hepalclc7) cells [24]. Moreover, Boyle et al. also indicated that flavonoid glycosides, such as quercetin-3-glycoside and isorhamnetin 4¢-glucoside, increased in plasma level after onion meal and were related with the enhancement of resistance to DNA strand breakage in lymphocytes [25]. In this study, ESI-MS/MS has identified some chemical constituents in black shallot extracts; however, further experiments have to undertake in order to clarify the relationship with their bioactivities. 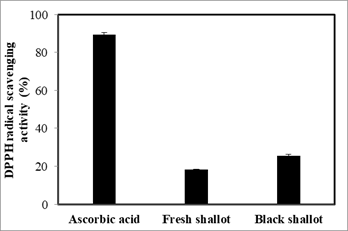 The anti-cancer effects of black shallot extract and fresh shallot extract were evaluated via MTT assay and the results are presented in Table 3. The anti-cancer activities of black shallot extract against Hela cells and HepG2 (18.58 18.58 ± 0.45% and 19.94 ± 0.58%, respectively) were higher than those of fresh shallot extract (13.65 ± 0.42% and 14.85 ± 0.49%, respectively). The anticancer effect of Allium species has been proven in several previous studies. For example, Li et al. proved that intraperitoneal injection of raw garlic extract (equivalent to 100mg wet weight) for 21days could cure the highly aggressive malignancies (sarcoma 180 and EL4-induced ascites) in mouse models [26]. According to Fragis et al, onion extracts exhibited cytotoxic, anti-proliferation, anti-migratory effects against human breast cancer (MDA-MB-231 and MCF-7 cells) cell lines [27]. Moreover, the anticancer activity of the aqueous extract of shallot against mouse fibrosarcoma cells (Wehi164), human acute T-cell leukemia (Jurkat), and erythroleukemia (K562) cells was also reported [4]. In a previous study, Pan et al. (2018) also indicated that quercetin glucosides, constituents of Allium species such as garlic, onion, Chinese onion, Welsh onion, could inhibit the growth of HepG2, HT-29, and PC-3 cancer cells [28]. To the best of our knowledge, this study is the first work that proved the anticancer effect of black shallot and compared the efficiency of black shallot and fresh shallot against cancer cells. These data provide the scientific basis for further application of black shallot for the treatment of cancer-related diseases.

The authors gratefully thank the Board of Directors of the Institute of Biotechnology and Food Technology, Industrial University of Ho Chi Minh for their support of equipment during this research project.

The authors declare there is no conflict of interest regarding the publication of this paper. 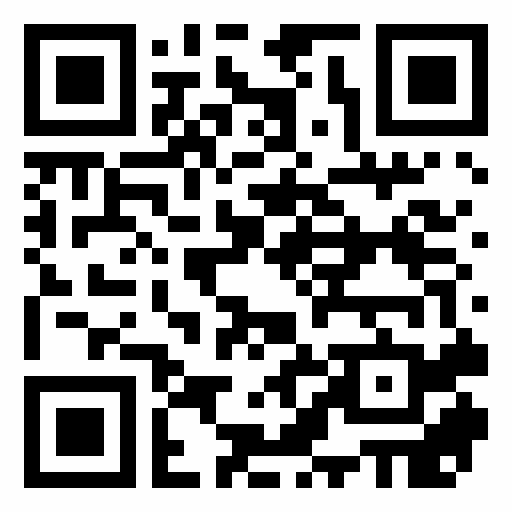