The Solid Dispersion technique is the most promising technique for improving the solubility and bioavailability of poorly water-soluble drugs. The hydrophobic drug is dispersed into a hydrophilic inert carrier using different techniques. The most commonly used carriers are PVP, Tween 80, Gelucire, PEG, etc. There are different methods of solid dispersion like spray drying, SCF technology, fusion method, lyophilization method, electrospinning method, and solvent method. However, some disadvantages are associated with the techniques that limit its use in the pharmaceutical industry like stickiness in the product, poor flow property, flow compressibility, less stability, and poor wettability. In order to overcome this, solid dispersion adsorbate is nowadays popular in the pharmaceutical industry. [1, 2] The Surface Solid Dispersion technique is defined as dispersing one or more active ingredients on a water-insoluble carrier of extremely high surface area to achieve increased bioavailability. The carrier used in surface solid dispersion is a porous material, which is hydrophilic in nature. These provide a larger surface area to the drug particles. The drug release from the carrier depends on porosity, particle size, and surface area of the carrier. In the solid dispersion method, the conversion in amorphous to the crystalline form of drug particles occurs, which is prevented by using adsorbent. Adsorbent having inter and intra pores on their surface provides a larger surface area. The larger the surface area, the higher the wettability, dissolution, and solubility of the drug. In the present work, neusilin was used as an adsorbent, which is a magnesium aluminum silicate. Neusilin has a surface area of 300 m2/g and adsorption capacity of 3.2 ml/g. Due to its amorphous nature, it restricts the conversion of amorphous to a crystalline drug. Whereas, clopidogrelbisulfate was used as a model drug as it belongs to BCS class II widely used as an antiplatelet agent or blood thinner. [3, 4]

Where, Sois the solubility of Clopidogrel bisulfate in the absence of polymer. Gibb’s free energy of transfer (ΔG°) from pure distilled water to polymer solution was calculated using

Where, So/Ss is the ratio of the solubility of Clopidogrel bisulfate in the solution of polymer to that of the in absence of polymer.

A three-level, two-factor 32 (3 levels, 2 factors) design was used. Low, medium, and high levels of each variable were coded as -1, 0, and +1. Nine Solid dispersion Adsorbate tablets of Clopidogrel bisulfate were prepared using 32 full factorial designs as shown in Table no:3. The range of factors must be chosen, in order to measure its effect on the response variables. The design was selected, as it provides a sufficient degree of freedom to resolve the main effects and the interaction. To find out the control factors that significantly affect response variables, Stepwise regression analysis was used. The ratio of Carrier and drug in solid dispersion (X1) and Ratio of Adsorbent to solid dispersion (X2) were selected as independent variables as shown in Table no:1, while, Q30 (Y1), angle of repose (Y2), and %DE30 (Y3) were taken as dependent variables as shown in Table no:2 [6, 7]

To calculate the response, a statical model containing interactive and polynomial terms was used as follows:

Where, b0 is the arithmetic mean response of all trails, and b1,b2,b12,b11,b22 are the coefficient for the corresponding factor X1, X2,X1X2, X1X1, X2X2. This represents the average result of changing one factor at a time from its low to high value. Y is dependent. How the response changes when two factors are simultaneously changed, is indicated by the interaction term (X1X2). The polynomial terms (X1X1, X2X2) are included to investigate the non-linearity. The polynomial equation and all significant values were obtained by applying Design-Expert Software (7.0.0).

Solid Dispersion Adsorbate tablets of Clopidogrel bisulfate were prepared by the solvent evaporation method. PEG 4000 was dissolved in methanol. The drug was also dissolved in methanol separately. Both solutions were mixed and sonicated. Solid dispersion of Clopidogrel bisulfate and PEG 4000 were prepared in different ratios as shown in Table No.3. Neusilin was added to this mixture to obtain solid dispersion adsorbate. Then the granules were properly mixed with SSG, Spray-dried lactose, and magnesium stearate. The tablet with an average weight of 500 mg was prepared, by direct compression method using a rotary tablet machine. [8, 9]

The dissolution was measured by USP apparatus II using 900 ml of 0.1N HCl. The medium was maintained at 37± 0.5 °C and 75 rpm. The aliquots of 5 ml were withdrawn at regular intervals. The sample was analyzed using the UV-visible spectrophotometer. [10]

It is defined as the area under the dissolution curve up to a certain time (t). It is expressed as a percentage of an area of the rectangle described by 100% dissolution at a time. The % dissolution efficiency was calculated by [11]:

Y is the drug release percentage at t time

In order to assess the reliability of the equation that describes the influence of the factors on the Q30, angle of repose, and %DE30. Additional checkpoint experiments were conducted. The % relative error between predicted values and experimental values of each response was calculated using the following equation:

To optimize all the responses with different targets, graphical optimization by the overlay plot was used. The optimized formulation was obtained by applying constraints on independent and dependent variable responses. The constraints were Q30 minimum 85% (Amount of drug release in 30 min should be more than 85%), angle of repose maximum value (Angle of repose less than 25 indicated excellent flow properties), and % DE 30 maximum value (dissolution efficiency close to 100% in 30 min). These constraints were calculated using the Design-Expert Software (Version 7.0.0) [12,13]

A differential scanning calorimetry study was carried out to evaluate the thermotropic property and thermal behavior of drug, carrier, and adsorbent

According to ICH guidelines, the optimized formulation was kept for the accelerated stability studies (40 ± 2°C and 75 ± 5% RH), for one month in a stability chamber. The optimized formulation was placed in USP type – I amber-colored vials. Closed with rubber plugs, Sealed with aluminum caps. The samples were withdrawn after the stability period. Dissolution studies were carried out. The similarity factor (f2) was used for the evaluation of the drug release. [16]

The blood-thinning effect of Clopidogrelbisulfate on the platelet aggregation was investigated using Rat. A dose of 20 mg/kg body weight was administered orally to each rat. The control group was also treated similarly (with the sterile water at the equivalent volume relative to body weight). Cotton was soaked with chloroform solution and put close to the animal nose in order to keep the animal anesthetized. The tail of the rat was cut (0.5 cm distal tip of the tail) and placed in a pre-warmed phosphate buffer saline solution. The time of onset of bleeding and collection of blood volume was recorded. [17] 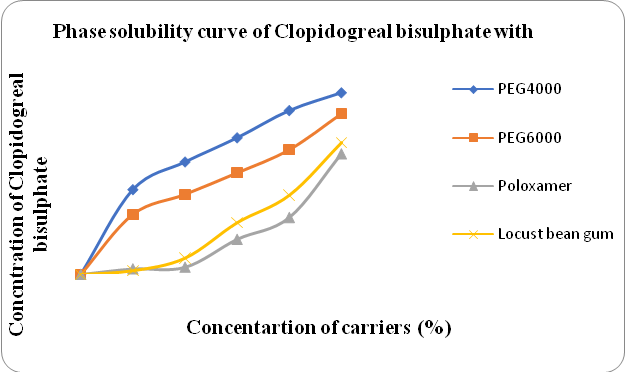 Figure No:1 shows the phase solubility of Clopidogrel bisulfate in different Carriers. The R2 value was found highest in PEG 4000.

The solubility of Clopidogrel bisulfate in different carriers was evaluated from phase solubility studies and it was found to be 0.15 mg/ml in water. The solubility increased with increasing the concentration of polymer. The r2 value of PEG 4000 was 0.95 (Table no:5), which was the highest compared to other polymers. The negative sign of Gibbs free energy showed the solubilization process of Clopidogrel bisulfate. PEG 4000 was used as a carrier for the preparation of solid dispersion as shown in Table no:4. [18] 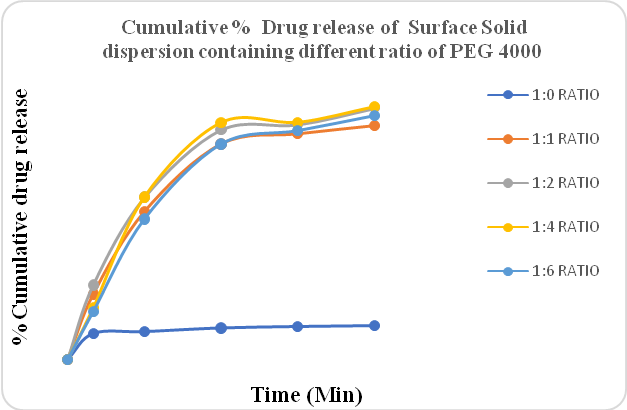 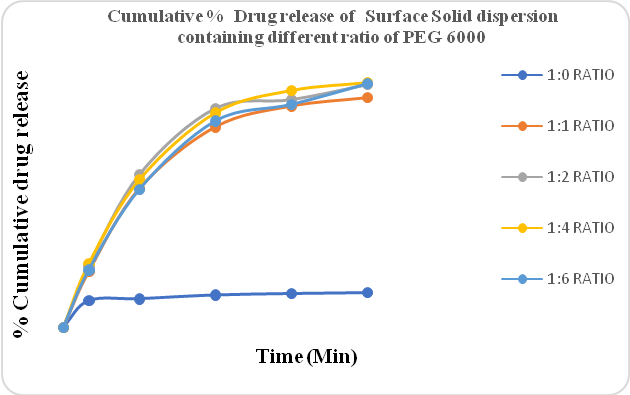 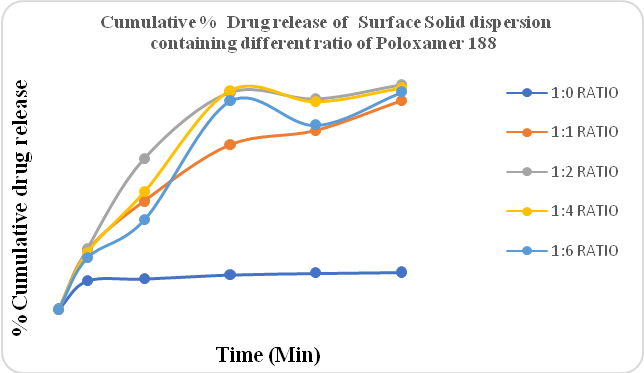 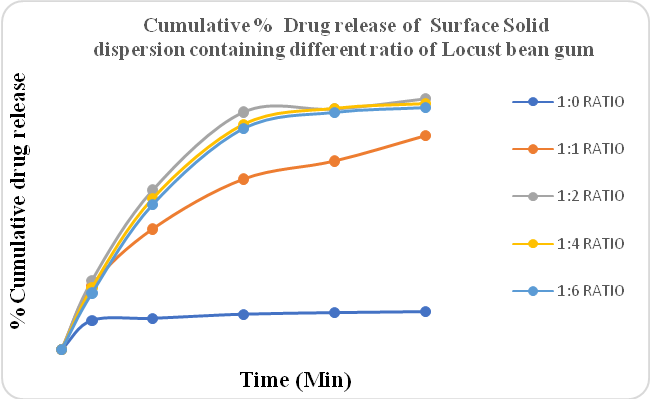 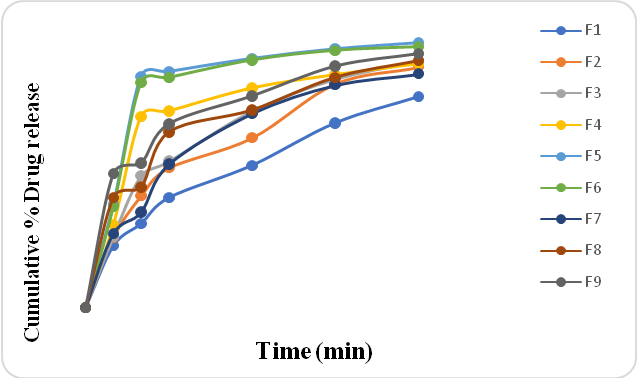 Figure No.6Shows the drug release of solid dispersion adsorbate tablets containing the drug. There was an increment in drug release withincreasing polymer. As per USP, the amount of drug release in 30 min for the conventional formulation is 85%. Formulation F5 and F6 and F9 showed a drug release of more than 85%.

Result of ANOVA study for Q30

As shown in Figure 7, The coefficient values indicate that, as the Ratio of Carrier and Drug in solid dispersion increases, the amount of drug release at 30 min increases. Due to PEG 4000, the dissolution rate of Clopidogeral bisulfate increases. When the PEG comes in contact with the dissolution medium, it becomes hydrated. This causes the solubilization of drug particles and releasing the drug. The positive sign indicates that the drug release increased with increasing concentration of the carrier.

Polynomial equation for Angle of repose

In Table 6, the response of %DE30, Angle of repose and Q30( Amount of drug release at 30 min) have Coefficient of variance value of 3.44, 1.51 and 3.63 respectively , which shows that all results are in acceptable range.

To validate the model, Checkpoint batches were prepared and evaluated as shown in Table no:7. The condition was the same as the outline for the other batches. The results were found within acceptable criteria.

The overlay plot was used to obtain all the responses with different targets (byusing a multicriteria decision approach). The constraints were %DE30 (dissolution efficiency of 95%), Q30 minimum 85% (the amount of drug release in 30 min for Clopidogrel bisulfate should be more than 85% (AS per USP) and for Angle of repose maximum value 25 (value of less than 25 shows excellent flow property). By applying constraints on dependent variable responses and independent variables the optimized formulation was obtained. The variables were calculated using Design-Expert (version 7.0.0). The overlay plot is shown in Fig No.9.1 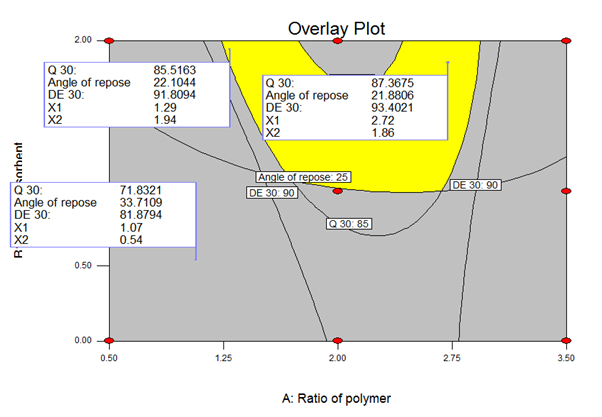 In the overlay plot, the yellow portion shows the design space for the said target values.

Table no.8 shows observed and experimental values of the optimized batch of Clopidogrel bisulfate. 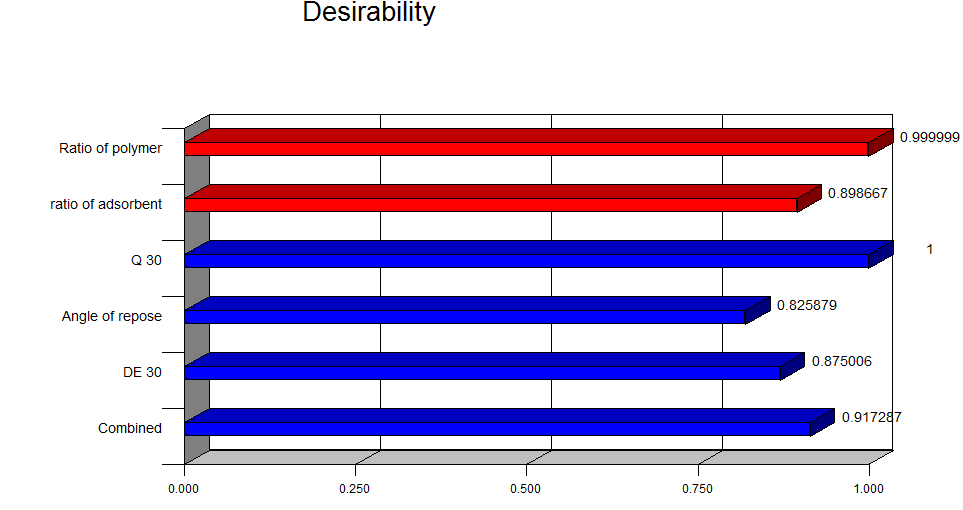 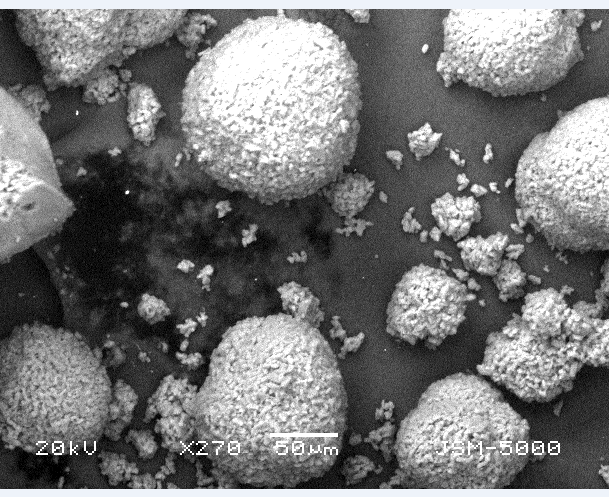 As shown in Table no.9, the amount of methanol present in Surface solid dispersion was 2.33 PPM, which os below the limit (proved by Gas chromatography). So, methanol was used  as a solvent for the preparation of Surface Solid dispersion.[20] 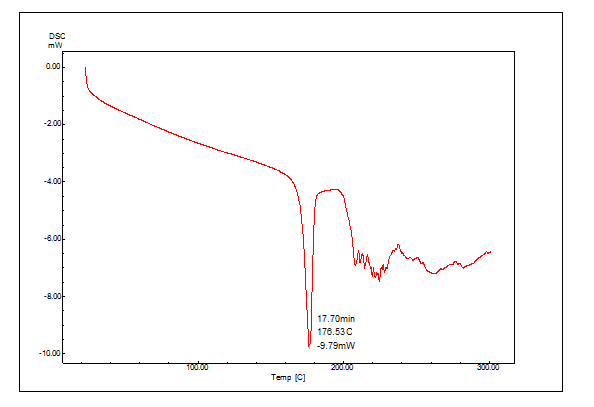 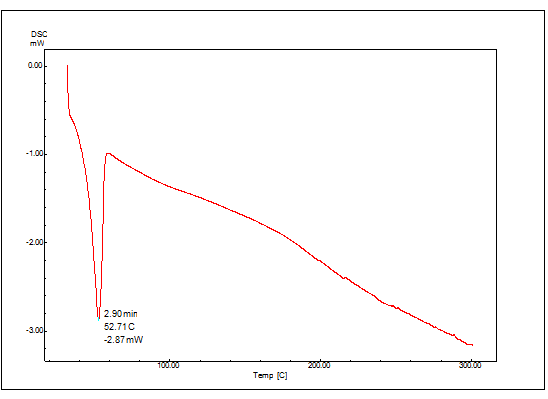 The DSC thermogram of Clopidogrel bisulfate and surface solid dispersion is shwon in Figures no:14 and 15, respectively. Clopidogrel bisulfate shows a sharp peak at 176.63º C corresponding to its melting point (176 -178º C). In figure no:15 the complete disappearance of the drug melting peak in surface solid dispersion was found because the drug solubilized completely in carrier PEG 4000.

The inhibition of platelet aggregation was measured using the bleeding time.

From this study, it was concluded that the solubility and dissolution properties of Clopidogrel bisulfate were improved by using the solid dispersion Adsorbate technique. By response surface plot analysis and polynomial equation, the effect of independent variables on dependent variables (dissolution variables) such as %DE30, Angle of repose, and amount of drug release in 30 min was analyzed. The factorial batches were evaluated for pre- and post-compression parameters. From the platelet aggregation inhibition study, the effectiveness of Clopidogrel bisulfate containing surface solid dispersion was confirmed. So, it can be concluded that the Solid Dispersion Adsorbate method is one of the alternative methods for improving solubility and dissolution of poorly water-soluble Clopidogrel bisulfate.

There is no conflict of interest for this research work. 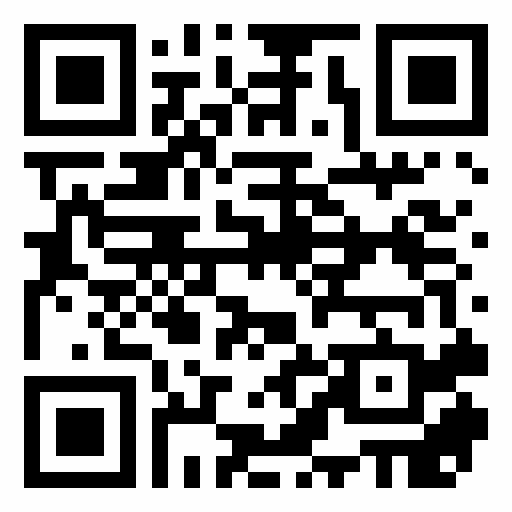