Kermes Dye Extract from Coccus Ilicis Insect as An Alternative Counter Stain Instead of Eosin in Various Tissue Constituents: An Experimental Study

Kermes is one of the known oldest dyes. It is obtained from the bodies of an insect, Kermes ilices (formerly known as Coccus ilicis), and Kermes vermilio. It is chemically very similar to carmine and, as the older name indicates, the insects are related to those from which carmine is obtained. This study was conducted to evaluate the efficacy of Kermes dye as a counterstain after hematoxylin, and to compare its staining ability with that of routinely used Eosin dye. 0.5g and 1gm of kermes dye were respectively dissolved in 100 ml of D.W. The solution was used to stain different tissue structures and the result was compared with 0.5% and 1% eosin. It was revealed that kermes dye could be used as a counterstain after hematoxylin, its staining ability was also good and comparable to that of eosin dye with a special affinity for collagen and muscle fibers. Kermes dye could be used as a histological stain, which stains similar to eosin dye and its specific affinity for collagen and muscle fibers authenticates its role in the treatment of collagen and muscle disorder.

Although there is huge progress in diagnostic facilities in histopathology, simple stains and H&E still remain of an important value [1, 2]. This study was done to find out the staining ability of crimson as a natural dye. Because the natural dyes are cheap, easy to prepare and use, available, eco-friendly it could substitute many different dyes in the histopathology lab [3, 4].

Crimson (C) is a strong reddish - purplish color, originally used to describe the color of the kermes dye produced from a scale insect, Kermes vermilio that feed on the sap of Kermes oak [5] “Family Kermesidae (Hemiptera, Coccoidea) exclusively develops and feeds on Fagaceae trees [6]. This scale insect family contains 100 species distributed among 10 genera and they are currently known in the Palaearctic, Oriental, and Nearctic regions of the world. Kermes Boitard is the major genus in the Mediterranean and European regions. In these regions, 20 species of Kermes have been recorded, all off deciduous and evergreen oak trees (Quercus) [6]. Some scale insects have been known as sources of red dye used in the textile, art, and wine industries in the Mediterranean, Middle East and Central Asia regions for many centuries [7]. Researchers have suggested that the red dye used for both ritual and secular purposes during ancient times in Israel apparently had been imported from neighboring countries where such dye producing scale insects as Kermes vermilio Planchon and Porphyrophora hameli Brandt are known [8]. However, red dye has been extracted from both the eggs and adult females of Kermes echinatus and chemically analyses have suggested that Kermes echinatus might be the “Tolaat Shani” (scarlet worm in Hebrew) [9]

“Kermesic acid, as Dimroth termed the pigment, was first prepared in the pure state by Heisse. According to Dimroth, who followed Heisse’s procedure, the crude material is first released from a wax, cerotic ceryl ester/no by extracting with ether; then the pigment, which is present as a salt, is released by ethereal hydrochloric acid and taken up in ether. It is purified through the sodium salt and again precipitated with acid. 5 kg of crude material yield approximately 50-55 grams of pigment. Kermesic acid, C forms brick-reel needles and is dissolved in water to yellow-red, and in sulfuric acid to violet-red solutions. It dyes wool orange-red from an acid bath and gives scarlet-red dyeings, which are less blue than those of carmine on a tin mordant. The constitution of kermesic acid 211 is deduced from the following observations. It contains four hydroxyl groups, which may be acetylated, and oxidation yields nitrococcusic acid, also obtained from cochineal. Methylation with dimethyl sulfate gives a trimethyl derivative, by oxidation of which with potassium permanganate the methyl esters of two acids are obtained”. Crude kermes contains, in addition to kermesic acid, a second pigment, flavokermesic acid. Carmine could be used as a source of Kermesic acid and flavokermesic acid [10].

The present experimental study was carried out in the Department of Histopathology and Cytology, Faculty of Medical Laboratory Sciences, University of Khartoum.

The Kermes dye powder or crystals are available commercially; 0.5g and 1 g of this powdered material were weighted using electronic/digital weighing machine, then dissolved in 100 ml of D.W in a beaker. Two concentrations of this dye were selected to standardize this dye with different times namely; 2min, 4min, and 8 min.

Three successive days well-fed rabbit put in a closed cabinet with a piece of cotton filled with chloroform, rabbit died after about 20 minutes, this was assured after the pulse the heart has been checked for different time intervals. After that, the rabbit was fixed in a dissection board and most of the tissues were taken and washed with normal saline, this was followed by fixing them in 10% formalin (each organ was put in a closed urine container containing about 50 ml of 10% formalin) at the room temperature for 48 hours.

The following are the size of the tissue taken from the rabbit (sometimes just part of the tissue was taken in case of the large organs):

Small pieces from all the organs mentioned above (about 3-5mm) were taken in a separate cassette, processed with an automatic tissue processor following the standard routine tissue processing programs protocol:

Two sets of 3 μ thick sections were obtained. Each set comprised of 180 slides (60 liver, 60 tongues, and 60 colons). Sections were first dewaxed in xylene for 6 min and hydrated through descending grades of alcohol, then were stained with Mayer's hematoxylin for 10 minutes, followed by whashing in running tap water for 10 minutes, then one set (½ of the sections / 30 of each organ) was counterstained with 0.5% eosin, and the remnants (30 of each organ) were stained with 0.5% Crimson for 3min for the two counterstains. The slides were rinsed then dehydrated by air and mounted.

Sections were then dehydrated by air, cleared in xylene, and finally mounted with the synthetic (DPX) mounting media. Sections were observed using binocular Olympus microscope model no. CH20i at ×10 and ×40 magnifications.

The slides were evaluated by experts subjectively for the quality of cytoplasm and connective tissue staining, for nuclei staining, and finally for nuclear-cytoplasmic contrast.

Table 1 shows the frequencies and compare between the two counterstain staining qualities.

Table 1: Comparison of Crimson and Eosin dyes used in different types of tissues 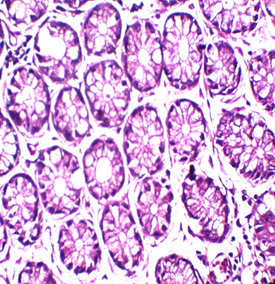 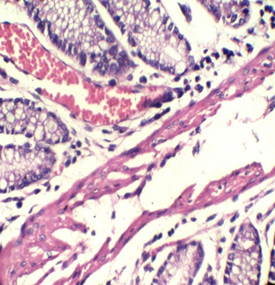 Figure 1: Colon stained with Mayer's hematoxylin and 0.5% Crimson for 3minutes in the right, and with H&E in the left. RBCs are sharply stained. 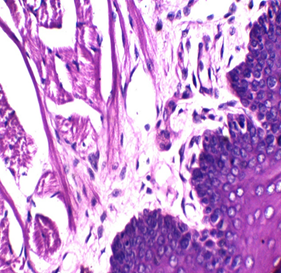 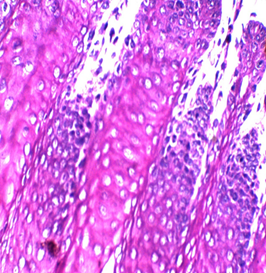 Figures 2: Tongue Stained with HK (Hematoxylin in the left and Kermes dye/Crimson in the right) for 3miutes 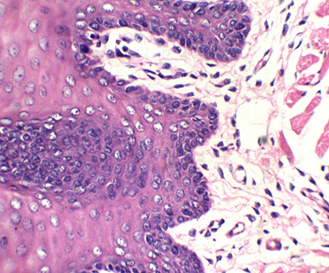 Figure 3: stained with HE for 3min (×40). Notice increasing the light source with the photo on the upper right (Kermes dye), which shows the epithelium of the tongue 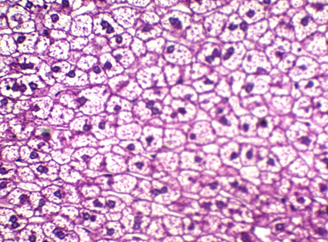 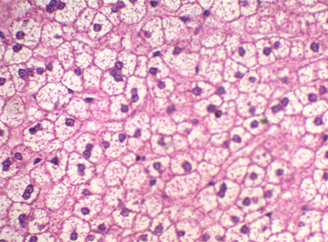 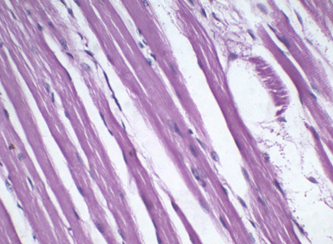 Kermes dye is an old dye that is produced from the dried body of the female gender of some species of the family Kermesidiae, and it has been used for dying textiles and for cosmetic issues [11, 12].

To our knowledge, this trial may be the first attempt to use kermes dye in histology. Although we found no paper discussing this issue, there are a lot of references that mentioned the chemical structure of the kermes dye. Generally, the reaction of the Crimson seems to be similar to that of acidic dyes (where acidic dyes have a special affinity to basic tissue components) (Figure 1)

As some synthetic dyes have an inherent tendency to be toxic and carcinogenic, it is recommended to be substituted by other more eco-friendly dyes. Crimson is safe to the environment in terms of toxicity and can be accounted for simplicity of preparation as a green chemical and can be used in research as a cost-effective reagent. Crimson and green chemical are prepared without any additives; therefore, the quality of staining may be enhanced with some additives such as glacial acetic acid.

In this research, several trials were accomplished with 72 slides (36 with Harris hematoxylin and the rest with Mayer’s hematoxylin), to standardize the concentration and determine the suitable time of staining, which is between 1-4 min, and the perfect time is 2 or 3min. The stain is very sharp and crisp especially with Harris hematoxylin when the light source was increased (Figure 2). It is better to use the stain within two weeks of preparation because its color starts to fade gradually, a fresh solution does not need filtration but after one week it is better to be filtered. In this study, the best concentration of Crimson that could be used was 0.5%, for about 1-4 minutes. There may be some variations for different tissue types because of the sample’s nature, poor staining was developed due to the increase of both, concentration and time of staining. No slide was poorly stained with 0.5% crimson, which means in tissues containing a high amount of collagen fibers or muscles (such as tongue) (Figures 2,3), satisfactory cytoplasmic staining may be obtained in just two minutes.

The Kermes stain (Crimson) can stain a wide range of tissue structures with varying shades of colors, these could be observed on RBCs, keratin, muscle, and fibers all these structures could be easily differentiated (Figure 5).

From this point of view, we recommend that adding some additives to the staining solutions may enhance the staining quality. Moreover, using different nuclear stains and increasing the number of slides from varying tissue types will increase the sensitivity of the results and give more insights about the differences and similarities between the new stain and eosin, leading to more satisfactory results. In addition, trying to better understand the dye tissue reaction and this chemical structure should be confirmed through advanced tools for more details such as NMR, HPLC, and XRF.

Disclosure of potential conflicts of interest

The authors declare that they have no conflict of interest.

This study was supported by the Deanship of Scientific Research at Prince Sattam Bin Abdul Aziz University. 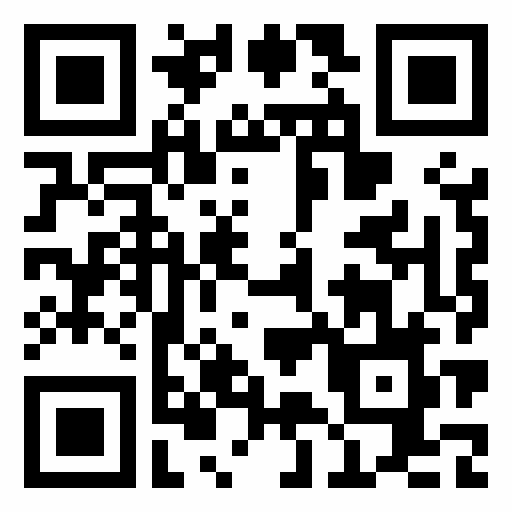