Isolation, Purification and Characterization of Terpene from Ficus Krishnae ‎‎

Ficus species is one of the most important medicinal sources of nature with effective properties to treat various diseases. In the present study, an attempt had been made to isolate, purify and characterize bioactive compounds from Ficus krishnae. Stem bark sample of Ficus krishnae subjected for extraction with methanol and dried the obtained extract. Separation and purification of terpenoids were done by thin-layer chromatography, column chromatography and preliminary phytochemical screening by Salkowski test and Liebermann Burchard’s tests. The isolated pure compound is characterized by FTIR, NMR, and GC-MS. The above spectral and physicochemical data isolated pure compound from the stem bark of Ficus krishnae was phytol [3, 7, 11, 15-Tetramethyl-2-hexadecen-1-ol] having a molecular formula of C20H40O‎.

The use of herbal medicine represents a long history of the human body [1]. And, medicinal plants have also been widely used as medicinal and aromatic plants since ancient times [2, 3]. Ficus species is one of the most important medicinal sources of nature with effective properties to treat various diseases [4, 5]. Terpenoids are the naturally diversified class of compounds, existing in oily form, flammable and unsaturated hydrocarbons. These are classified as monoterpenes, di-terpenes, triterpenes, and sesquiterpenes depending on their number of isoprene units in the formation of a different class of terpene compounds [6].

Ficus krishnae is a medicinal plant belongs to family Moraceae native to India also diverse in tropical Africa and Sri Lanka. This plant is also known by various names like Makkhann Katori in Hindi and Krishna fig or Krishna’s butter cup in English [7]. The special character of this plant is pocket like structure at the base of the plant and reaches 10 m in height, rapidly growing tree with aerial roots and spreading branches. All parts of the plant utilized for the treatment of inflammations, fever, vomiting, and leprosy. Stem bark and leaves having an anti-diabetes activity [8, 9]. Earlier the research studies of Ficus krishnae were carried out that have shown the significant antioxidant and anti-inflammatory [10], anti-heamolytic and anti-cancer activity [11]. Based on previous evidence the plant has the potential to cure various diseases to know bioactivity properties of a pure compound from FK plant. This is the first report to presenting the isolation, purification, and characterization of a pure compound from the stem bark of Ficus krishnae.

After collecting the Ficus krishnae stem barks The Dev Dev Vana botanical garden, Bidar, Karnataka. India, they were allowed to dry in shade for 2-4 weeks. After drying, the bark was grinded into powder and stored in an airtight container for further use.

The bark powder (100 g) was successively extracted by hot soxhlet extraction with methanol solvent (600 mL) for 6-8 hours. After extraction, the methanol extract was stored for future use [12].

Qualitative analysis of terpenes: The store methanol extract was subjected for the preliminary analysis for the presence of terpenes by using standard methods prescribed by Kokate et al., (1995) through the Salkowski test and Liebermann Burchard’s tests [13].

In the present experiment, a clean and dry glass column with 450 mm length and 30 mm bore was used. The loading sample was prepared by mixing 5g of extract (dissolved in chloroform) with 10g of silica gel (120-200µ mesh size) until the mixer turns to powder. The sample mixture was carefully added on the top of the silica gel column and mobile solvents are chloroform: methanol (9:1). Collected elutes were subjected for TLC for the confirmation of single spot, with chloroform: methanol as mobile phase. Later plates were sprayed anisaldehyde reagent and plate was placed in a hot air oven for 10 mins at 100˚C for the development of color in a separated band, spots appeared on plates are measured and calculated Rf value by using the following formula. A fraction with the same Rf values was pooled together to get a similar compound of the same solutions.

Distance traveled by the solvent

Structural characterization of an isolated compound

Isolated pure compound was subjected for structural characterization by using various spectral analyses which are mentioned below;

FTIR- Fourier-transformation-(FT)-IR spectrum of the isolated compound was recorded by using FT-IR spectrophotometer for studying the presence of functional groups. The sample was fixed in potassium bromide (KBr) disc then spectrum was measured at wave number ranged from (400-4000 cm-1). The various bands are recorded based on their wave number.

NMR spectroscopy-The 1H NMR and 13C NMR spectra were recorded on a Bruker Avance II 400 NMR spectrometer is used for the study with cryomagnet of field strength 9.4 T and 1H frequency 400MHZ. The chemical shifts expressed in ppm are recorded.

A qualitative examination of Terpenoids

Two preliminary qualitative tests like the Salkowski test and Liebermann Burchard’s test are conducted to test the presence of terpenoids in methanol extract of Ficus krishnae stem bark. The appearance of yellow color in the Salkowski test and deep red color at the junction of two layers in Liebermann Burchard’s test confirms the presence of terpenoid.

In the present study, the methanol extract tested for thin layer chromatography by using chloroform: methanol (9:1) solvent system, developed spot Rf value 0.8. These are further separated and purified by using column chromatography over silica gel; fractions were collected and checked for its purity by thin-layer chromatography (TLC) using chloroform: methanol (9:1). The similar Rf value fractions are pooled and evaporated for conducting further tests like physicochemical and spectroscopic studies for the isolation of pure compounds. The physicochemical observation indicates that the isolated compound is a yellow color liquid with a boiling point of 204˚C, soluble in methanol and DMSO. Furthermore, the structural characterization was done by NMR, Mass spectrometry and FTIR technique.

Nuclear magnetic resonance (NMR) is one of the important techniques followed by researchers to identify unknown compounds. The basic principle of NMR is mainly dependent on the magnetic properties of atomic nuclei like carbon atoms, hydrogen atoms, protons and also carbons isotope [15]. In the 1H NMR spectrum resonance at 5.32 ppm indicated the presence of double bond at 4.14 ppm which indicates the presence of oxygenated methylene group (-OCH2), four methyl doublet signals were identified as 0.87, 0.85, 0.85, 0.84 ppm including several methylene and methane signals, this data indicating that the compound contains 40 hydrogen atoms as shown in the Figure-2. 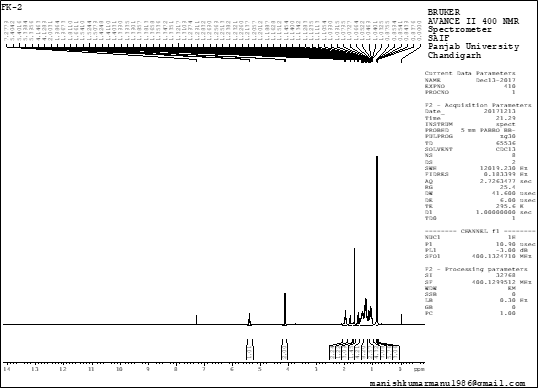 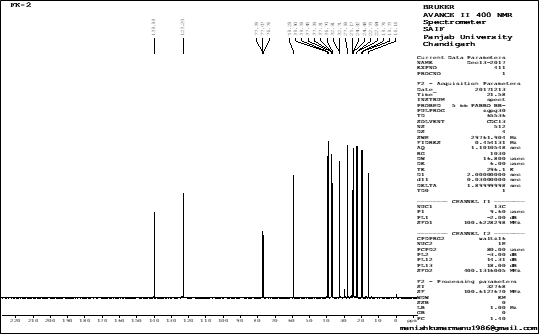 Mass spectrometry was the best technique to identify the relative molecular mass (molecular weight) of a bioactive compound, this technique applied only for organic compounds because of the bombardment of electrons that converts into energetic charged ions this gives rise to the molecular mass of compound. In the current study mass spectrum (GC-MS) of the compound has shown a maximum peak at 296.6 as shown in Figure-4. 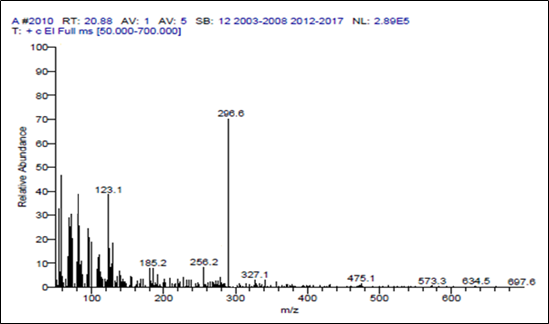 The mass spectrometry data and the physicochemical data (Table-1) of the isolated compound obtained in the present research revealed the mass of 296.6 which is the nearest value to the terpene Phytol (296.53). Hence, the molecular formula for our compound can be drawn as C20H40O this confirms that the isolated compound is Phytol. Phytol is an acyclic alcoholic diterpene, its IUPAC system named it as 3, 7, 11, 15-tetramethylhexadec-2-en-1-OL (Figure-5) found as essential oils of aromatic plants. Similarly, isolation and characterization of phytol were conducted [16] and also isolated the phytol from red algae Gracilaria foliifera [17]. It is a product of chlorophyll metabolism synthesized in plants and used as a precursor for the production of synthetic vitamin E and vitamin K [18].

Ficus krishnae stem bark methanol extract was subjected to isolation of pure bioactive compound by preparing the column filled with silica gel of 120-200 mesh size. The column chromatography experiment was repeated to get the pure compound which has been detected by performing the TLC of the fractions. After obtaining pure compound in column chromatography, it was subjected for Mass spectroscopy (GC-MS), FTIR, 13C and 1H NMR studies. Based on the data the compound was identified as Phytol (C20H40O) having the molecular weight of 296.6. It is concluded that entire screening methods provided molecular evidence of compound.

The authors give thanks to the University Grant Commission (UGC), New Delhi for giving them financial support to do the research work under Rajiv Gandhi national fellowship (RGNF) scheme. 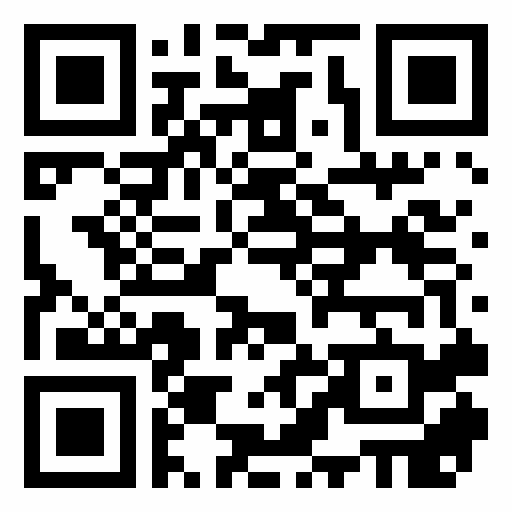